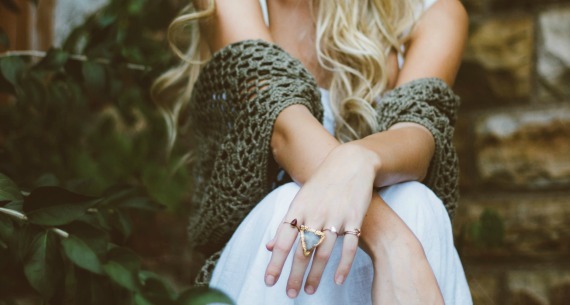 I learned about body shaming in sixth grade, when the boy I had the biggest crush on told me to “go home and take some growing pills,” because my breasts hadn’t yet developed. I did go home, but I cried to my perplexed mother instead, who encouraged me to shake it off.

This silken-haired boy with the one perfect dimple was my true love. I couldn’t get over it.

That moment was a defining one in my young life. I was transitioning. The way people viewed me was changing, and this acknowledgment became the first tendrils of confusing judgment. It was disruptive to my world, where I had played with my toy goat and dreamt of owning a kitten.

Little did I know deep inside me, flanking my panic disorder, an eating disorder was brewing. It wouldn’t rear its tenacious head until many years later, but it stuck the landing when it did.

When I was a junior in high school, my weight reached the highest it’s ever been. When I look at old pictures of myself, I am shocked by how, at any time in my history of being alive, I could be captured as a hint chubby. And it’s not to demean myself in any way, just an observation, as I have spent so much of my life thin… and painfully so.

I don’t recall how it started, but the advent of my eating disorder came on the heels of crippling anxiety. The kind you have to ride out as your body is possessed, stiff in bed, as goose bumps spring out along your skin, as you shake and cry and retch and try to be as still as possible as the tsunami overtakes you and you think you might actually die. The kind that makes you hide, that flips into action at a hair trigger. Most especially, the kind you can never ever reveal to anyone else because you fear an exorcism of sorts.

In one of my many attempts to exorcise this demon, I found myself in a therapist’s office. A famed place, where I would plunk my purse and coat down and we would skate on the very uppermost tip top of my problems and history. This therapist, a female with an encouraging smile, kept prodding me to go deeper, and I was growing increasingly uncomfortable with her drive to unravel the spool of my anxiety. But before I dumped her and fled (Anxiety! Take 32!), she instructed me to get a workbook to explore my emotions. This anxiety workbook was purchased in the relative safety of a bookstore and then brought home for me to stare at with wide eyes and a lurching stomach as I fought to keep the very thing it was supposed to prevent at bay. I hid it away. To glance at its cover was to ignite the holy hellfire destined to devour me once again.

And through it all… I was thin. These were my go-to replies: “I have a high metabolism,” “Oh, I don’t know…genetics, I guess.” “I do eat! Boy, you should see me dig in at home.” “Yes, you can take my plate now. Everything did taste wonderful.” “I guess I’m just not hungry.”

When body dysmorphia creeps in, you won’t see it coming!

I read about “Lollipop heads” as my own weight, stabilized, dipped, increased by one or two pounds, and then repeated the cycle. And I stayed this way for years, unconcerned about numbers or what I looked like in the mirror. Terrified I would never find a way to stay safe forever. To freeze time, to stop death, to stop tragedy, to stop loss and abandonment.

To stop infernal change whenever I got attached to anything, whenever truth unhinged me.

In 2007, I learned my father was going to prison. During that period, a doctor casually mentioned, at a routine exam, that I had an eating disorder.

I cried, railed, metamorphosed into a knot pulled tight. Everything clenched inside my body, loath to release, unsure how. Hyper-vigilance, waiting, as they put it, “for the other shoe to drop” controlled my body.

I had not known I was sick.

Relatives insisted they had been aware of it for years. “How could you not know this about yourself?” They asked as I clutched the phone, my tears making the receiver slick in my hand.

“Restrictive eating disorder,” as my psychiatrist called it. I was forced to see him as well as a nutritionist and a general doctor twice a week when my weight bottomed out. I had to eat to stay alive, but I didn’t know how. I would forever, it seemed, be in the grips of the series of traumatizing events that had been the catalyst in my life to this point, in the form of an illness that would cause eventual heart damage and continual devastating anxiety. Food was not safe to me, but an avenue to sickness, thanks to expired products in the fridge I had been exposed to as a kid; thanks to a father whose beefsteak boiling tomato face screamed at me to “Eat dammit!” while I sat in my high chair choking on my dinner and gasping to breathe. Thanks to ongoing abandonment, loss of family, thanks to moving our home 19 times before I was 21. Nothing felt safe, but food had been the only thing I could control.

I finally understood. I had finally cracked the surface.

Years of never letting up on the desire to get healthy, on the constant dissection of learning what made me sick and panicked, of gradual and then severe tie-cutting of the negative reinforcements of my own worst beliefs about myself (in the form of people). Years of redrawing boundary lines and then erasing them to redraw, redraw, redraw. Decades of therapists, prescriptions and today? I have a muffin top that amuses and delights me when I spy it spilling over the top of my pants.

So, when I read body shaming comments about a woman’s thick thighs, I cringe. When I hear chastisement of droopy breasts, I fume. I love my muffin top because I traveled dark and haunting paths to earn it. I lit the torch to my own recovery, even when I could not see the corridor, but all I knew was to “go forward.” And I kept going because my faith in myself, although smoldering, disintegrating and tenuous at times, never disappeared.

But I want to urge, that instead of hiding, help. Instead of shrinking, enlarge and speak. Embrace. Hold tight to the people around you who are determined to set you free and who love nothing more than to uplift you. But most vitally, hold tight to yourself and all your parts as you release the bindings of trauma, as you release the diseased root, the source of your pain. And then celebrate every bit of you…the powerful and the unsure… And if you are in recovery from an eating disorder, then especially, celebrate your wondrous, bulging, breathtaking muffin top.

If you or someone you know is struggling with an eating disorder, you can call the National Eating Disorders Association Helpline at 1-800-931-2237.
__
Original article appeared at The Mighty. Reprinted with permission.