Oh, Amanda Holden, why have you turned yourself into a Barbie doll?

By Liz Jones for The Mail on Sunday

At first, I thought it was Pamela Anderson. Hmm, those rather beady brown eyes . . .  is it Elle Macpherson? No, the star on the cover of the latest edition of Easy Living — you know, the tome for grown-ups, 40-plus women with homes, teenage children and conservatories — is Amanda Holden.

And while this is probably, just like every other magazine cover, extensively airbrushed, the problem is that Amanda Holden actually looks like this in real life. A Barbie doll. A ghost of her former self.

Now, whatever Amanda Holden wants to do to her face and body is entirely her choice. But the metamorphosis is truly astounding. 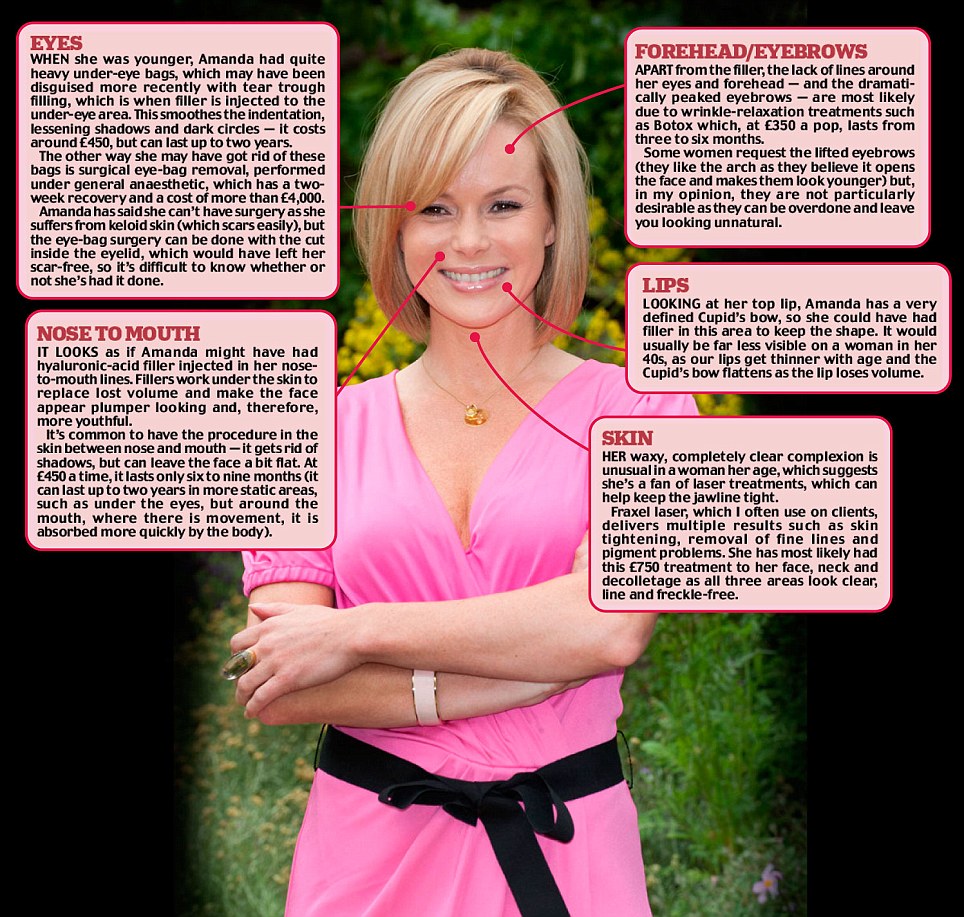 What Amanda could have had done, from her waxy, clear skin to her plump lips complete with a cupid bow

In 2002, she had lines around her eyes and tramlines from nose to mouth. You know, normal for a woman who was then in her early 30s. Back then, she had much less hair, softer eyebrows, no eyelashes to speak of. She was just . . . less. Pretty, but somehow normal, a friendly  girl-next-door type we used to know and love.

Wind back to 1991, as a contestant on Blind Date, and she reminds me of Renee Zellweger as Bridget Jones: a bit plump, in High Street clothes. Certainly not the someone who now reminds me of a drag artist, with a forehead so smooth it resembles a party balloon.

Her skin would probably squeak were you to run a finger over it. Aged 41 and a mother of two, she has no flaws at all. Not one. No age spots, no wrinkles, no discoloration, no fine lines.

She has even lost the childhood gap in her teeth and now has those big, all-American teeth seen  even in the mouth of the Duchess of Cambridge.

Amanda doesn’t look young; she just looks other-worldly. An alien whose life is not writ on her face, because her face is suddenly a blank canvas.

The look is Fifties Brigitte Bardot, which is apt, given she pre-dates feminism: she looks like the ultimate blonde airhead, a modern day Jayne Mansfield — surely not a role model for young women? 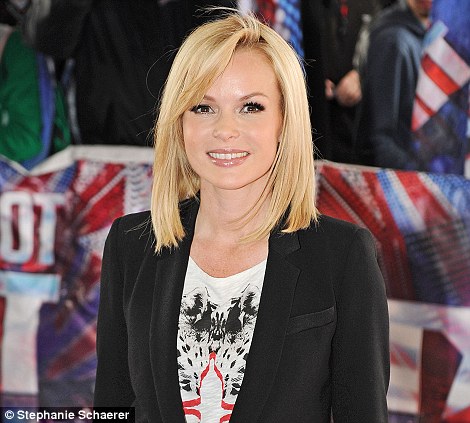 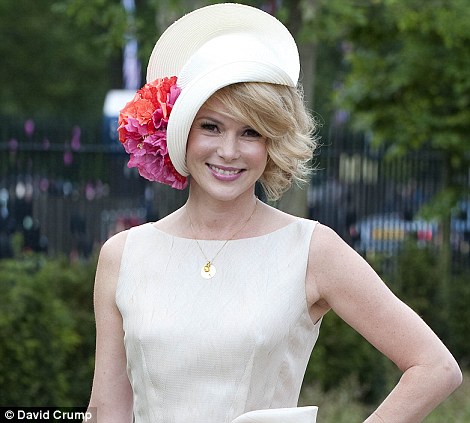 Unhappy in her own skin? Amanda pictured on the red carpet at a Britain’s Got Talent photocall (left) and dressed in her best at Ascot last month

What interests me most, though, is not so much the detail of what she has done — the Botox, the fillers — but why she has done this to her face. And I know why she has done it because I have done it, too: a face-lift, an eye-lift, Botox, fillers, microdermabrasion, the works.

I have regular injections of Botox in the corner of my mouth (oh, the pain!) to stop it drooping (I almost typed ‘drooling’; I’m sure that day will come), and to make me look more cheerful.

I do it to blot out the disappointment in my face, the sadness, the never having felt good enough. And, as you see yourself emerge ever different (I wouldn’t say younger, just not the same), the change becomes addictive: I’m supposed to have Botox and filler only every eight months, but instead I have it every three.

Women who have plastic surgery hate themselves and their lives. They detest who they are. I’m sure Amanda, like me, is not totally happy in her own skin, so she wants someone else’s.

The photo of Amanda as a child in 1985 is the most telling. She had freckles, mousy hair and  brown eyes. Unremarkable, but super-ambitious, she transformed herself by force of will.

I wager as a child she wanted to be Kelly LeBrock, the pillows-for-lips and pale blue-eyed star of Weird Science and sex symbol for a whole generation of young men in the mid-Eighties.

Thirty years on and I’ve just Googled Kelly, a once breathtaking, corkscrew-haired goddess I haven’t thought about for a while. When I type in her name, what comes up is the word ‘fat’. Another beauty who has ‘let herself go’.

This is the pressure women are under. We are expected to stay as we are, and if we go to seed, or ‘age’, then we are ridiculed. If we hold back the years using surgery, then we are the devil incarnate, letting the side down.

I think Amanda is another driven, self-doubting woman who merely wants to be the best she can, and  to work hard for as long as she possibly can.

While ambitious men do this by acquiring things, and power, women increasingly have to do it by changing ourselves. It’s silly, and dangerous, having surgery on our faces.

So, no, I don’t condemn Amanda Holden for her transformation. I feel sorry for her. Who knows what demons she nurses, what tragedies she wants to erase?