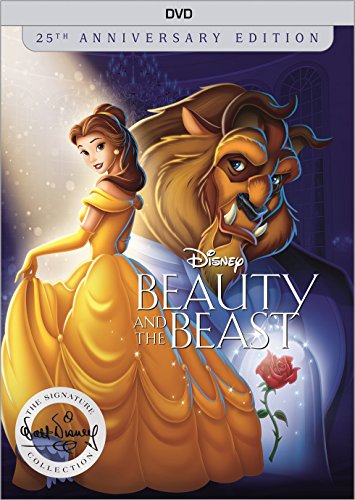 Join brave, independent Belle on the adventure of a lifetime as she sets out to rescue her father—and discovers the enchanted castle of a mysterious beast. Enjoy this timeless tale overflowing with unforgettable characters and music you’ll never forget, universally acclaimed as one of Walt Disney Animation Studios’ finest features.|It took more than 600 animators, artists, and technicians three and a half years to complete the project.|BEAUTY is the first animated Disney feature scripted by a woman, Linda Woolverton.|The film marked the first time each animator was credited on screen specifically for the character he or she brought to life.|Disney’s animation department won a Scientific and Technical Academy Award for the design and development of the Computer Animated Production System used to make the film.|The style of illustration was inspired by French painters Fragonard and Boucher.