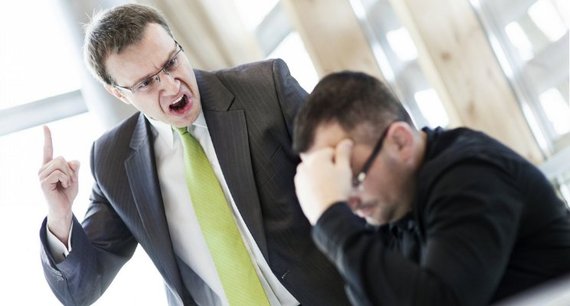 Far too many companies believe that a cutthroat pressure-cooker culture gets results. They think that the harder they crack that whip, the better people will perform.

Cutthroat business culture is so prevalent that it’s a cliché in our society, being the inspiration for countless TV shows and movies. The sad thing is that people relate to it on the screen because they’ve seen it firsthand.

But just because everybody seems to be doing it doesn’t mean it works; it just makes it easier to stick your head in the sand and ignore the consequences, and, make no mistake about it, the costs associated with treating people poorly are real.

High-pressure cutthroat organizations spend 50% more on healthcare for their employees than organizations with a more positive, supportive environment because 80% of workplace accidents are attributed to stress, as are 80% of doctor visits.

Cutthroat organizations are actually less productive because they experience significantly lower levels of employee engagement. Organizations with high numbers of disengaged employees have 40% lower earnings per share, are 18% less productive, and have 50% higher turnover.

If you’re working in a cutthroat environment, it’s probably negatively affecting your health, and the impact might be big enough that you should seriously consider doing something about it. If you aren’t yet motivated to take action, consider how the following hallmarks of cutthroat environments suck the life out of people.

1. They overwork people. Nothing burns good employees out quite like overworking them. It’s so tempting to work your best people hard that managers frequently fall into this trap. Overworking good employees is often perplexing to them; it makes them feel as if they’re being punished for a great performance. Overworking employees is also counterproductive. New research from Stanford shows that productivity per hour declines sharply when the workweek exceeds 50 hours, and productivity drops off so much after 55 hours that employers don’t get anything out of the extra work.

2. There’s no empathy. Empathy matters. Does your boss really see you as a person and care how you’re doing, or is he only focused on how much work you churn out? More than half of people who leave their jobs do so because of their relationships with their bosses. Smart companies make certain that their managers know how to balance being professional with being human. These are the bosses who empathize with those going through hard times, yet still challenge people. Bosses who fail to really care will always have high turnover rates. It’s impossible to work for someone for eight-plus hours a day when they aren’t personally involved and don’t care about anything other than your production yield.

3. They don’t recognize contributions or reward good work. It’s easy to underestimate the power of a pat on the back, especially when it comes to top performers who are intrinsically motivated. Everyone likes kudos, none more so than those who work hard and give their all. Managers need to communicate with their people to find out what makes them feel good (for some, it’s a raise; for others, it’s public recognition) and then to reward them for a job well done. With top performers, this will happen often if you’re doing it right.

4. There’s no socializing and no fun. Strong social connections are an integral part of a healthy workplace. People who have strong connections with their colleagues get sick less often, are less likely to become depressed, learn faster, remember more, and simply do a better job. People don’t give their all if they aren’t having fun, and fun is a major protector against burnout. The best companies to work for know the importance of letting employees loosen up a little. Google, for example, does just about everything it can to make work fun–free meals, bowling allies, and fitness classes, to name a few. The idea is simple: if work is fun, you’ll not only perform better, but you’ll stick around for longer hours and an even longer career.

5. They make a lot of stupid rules. Companies need to have rules–that’s a given–but they don’t have to be shortsighted and lazy attempts at creating order. Whether it’s an overzealous attendance policy or taking employees’ frequent flier miles, even a couple of such unnecessary rules can drive people crazy. When good employees feel as though big brother is watching, they’ll find someplace else to work.

6. People don’t help each other out. There’s a big difference between delegating responsibility and abdicating it. A boss who abdicates responsibility thinks that it’s your problem not his and that you alone are responsible for solving it. However, research shows that managers who support their employees in tasks that they delegate produce better team players who are more willing to help others and are more committed to their jobs.

7. They don’t let people pursue their passions. Google mandates that employees spend at least 20% of their time doing “what they believe will benefit Google most.” While these passion projects make major contributions to marquee Google products, such as Gmail and AdSense, their biggest impact is in creating highly engaged Googlers. Talented employees are passionate, and providing opportunities for them to pursue their passions improves their productivity and job satisfaction; however, many managers want people to work within a little box. These managers fear that productivity will decline if they let people expand their focus and pursue their passions. This fear is unfounded. Studies have shown that people who are able to pursue their passions at work experience flow, a euphoric state of mind that is five times more productive than the norm.

8. Bosses don’t listen. When employees feel that their managers are approachable, supportive, and willing to listen, performance improves. That feeling of connection leads to a willingness to experiment and take risks, which, in turn, leads to better outcomes. On the other hand, if conversations between managers and employees never extend beyond TPS reports, and any attempts to ask questions or offer suggestions are rebuffed, the work environment is probably cutthroat.

So what should you do if you are working in a cutthroat environment? Should you leave? I can’t answer that question for you. What I can do is tell you that the mental and physical consequences are real. Even if you decide to stick it out because you think the potential payout is worth the short-term sacrifice, just be certain you’re not sacrificing something you can’t get back–your health.

Have you ever worked in a cutthroat environment? Please share your thoughts in the comments section below, as I learn just as much from you as you do from me.